You are here: Home / News / Appeal for information after Red Kite found shot in Bedfordshire

Bedfordshire police and the RSPB are appealing for information after a dead Red Kite was found near Toddington, Bedfordshire, containing as many as 10 pieces of shot. 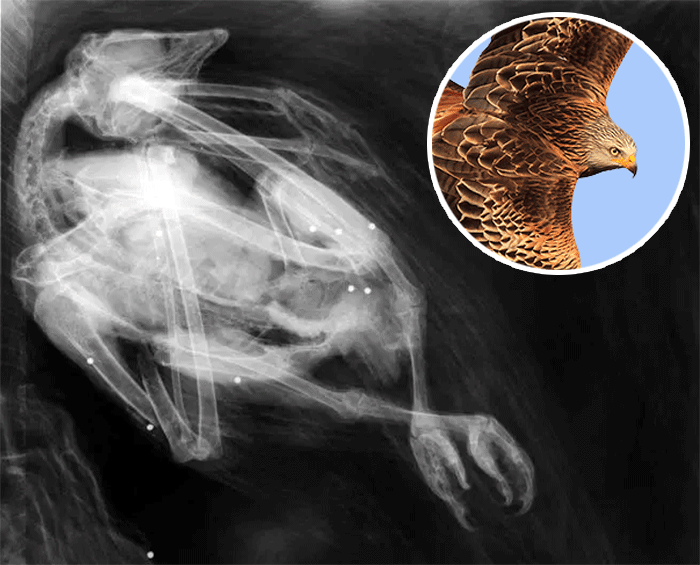 X-ray showing the shot Red Kite, the bird will most likely have been shot at close range to incur this level of damage.

The bird was discovered by a member of the public at Daintry Wood and sent for post-mortem examination. Radiography using X-rays, carried out by Zoological Society of London (ZSL) revealed 10 pieces of lead shot lodged in the body.

Inspector Mark Farrant, who leads the Operation Sentinel Rural Team which has responsibility for all Bedfordshire wildlife crime matters, says: “This is a particularly worrying incident against a bird that is fully protected under the Wildlife and Countryside Act. I would ask anyone with information relating to this or similar incidents to call Bedfordshire Police.”

According to the RSPB, the shooting of birds of prey is a widespread problem in the UK. The organisation’s latest Bird Crime report cited 196 reports of shooting, trapping and destruction of birds of prey in 2015, including Red Kites.

Jenny Shelton, Investigations Liaison Officer at the RSPB, says: “It is appalling to find yet another shot Red Kite, and one containing so many pieces of shot. This was clearly no accident, and the bird will most likely have been shot at close range to incur this level of damage.

“This incident is especially sad considering the lengths that have been taken to re-introduce these splendid birds. Red Kites feed mainly on carrion, so pose no threat to people, pets or game, so there is no logical reason for these birds to be targeted. To most of us they are a treat to see, and can be identified by their forked tail and red-and-white colouring.”

Although a fairly common sight in Bedfordshire now, thanks to one of the world’s most successful reintroduction schemes, in the 1980s Red Kites were one of the UK’s rarest breeding birds.

If you have any information relating to this case, call Bedfordshire police on 101.

If you find a wild bird which you suspect has been illegally killed, contact RSPB investigations on 01767 680551 or fill in the online form

At the end of July, beginning of August, 29 black kites, two kites and a dead buzzard have been … END_OF_DOCUMENT_TOKEN_TO_BE_REPLACED

Friuli,  in northeastern Italy, used to be one of the regions of the Apennine Peninsula most … END_OF_DOCUMENT_TOKEN_TO_BE_REPLACED

Inspectors of the Dutch Food and Consumer Product Safety Authority (NVWA), in collaboration with the … END_OF_DOCUMENT_TOKEN_TO_BE_REPLACED

A real-time communication tool for information exchange and cooperation in the area of nature conservations issues between enforcement officials, national authorities and (inter)national and regional organisations of stakeholders.

Halting and reversing the loss of biodiversity by 2020 is a priority within the European Union. The implementation of EU Nature legislation (the Birds and Habitat Directives) is essential to achieve the EU 2020 biodiversity target. However, implementation and enforcement need to be improved. As relatively high number of complaints … END_OF_DOCUMENT_TOKEN_TO_BE_REPLACED

We use cookies to ensure that we give you the best performance of our website. If you continue to use this site we will assume that you are happy with it.OK